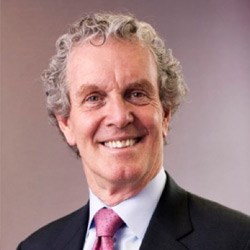 His initial medical training was in Edinburgh and then he came to the Royal Marsden, London, for specialist training in cancer medicine. He also spent some time in Boston at the Dana-Farber Cancer Institute, Harvard. Over the years his principal clinical research interests have been in breast cancer, lung cancer, and in new drug development.

He was involved in the early clinical development of several anticancer drugs that have subsequently proved effective in the clinic, including carboplatin and letrozole. In recent years he has become increasingly involved in neoadjuvant and short-duration preoperative therapies as a research approach towards individualised treatments for breast cancer.

He was awarded the Susan G Komen for the Cure Brinker Award for Scientific Distinction at the 2009 San Antonio International Breast Cancer Conference, and in 2017 he was Visiting Professor at Ann Arbor University, Michigan. Professor Smith was appointed first Chairman of the UK Breast Trials Intergroup and has also been Chairman of the British Breast Group.

He was the Scientific Chairman of the Breast Section of 2012 ESMO, and he has also chaired several national professional bodies including the Association of Cancer Physicians, the Royal College of Physicians Specialist Advisory Committee for Medical Oncology, and the NCRI Lung Cancer Clinical Studies Group.